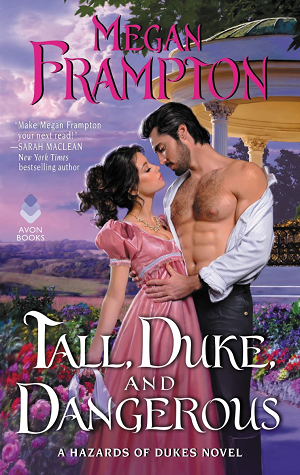 Megan Frampton returns with the second book in the Hazards of Dukes series, a series that made Sarah MacLean say “Make Megan Frampton your next read!”

He needs a bride…

Nash, the “dangerous” Duke of Malvern, has always bristled against the rules of English society. Hot tempered and fearful of becoming like his brutish late father, he lives a life of too much responsibility and too little joy. And although he’s vowed to never marry, a duke has a duty—and there’s only one way to get himself an heir and a spare. So Nash reluctantly takes a look around at society’s available young ladies to see who might be willing to put up with his one-word answers and frequent glowers.

She longs for love…

After the death of her father and wicked stepmother, Ana Maria goes from virtual servant to lady-in-training, and while society life has its benefits—gorgeous gowns!—its restrictive rules stifle her sprit. And when her independent actions put her in danger, her half-brother insists Nash teach her some self-defense. While most of London’s ladies find Nash intimidating, she only sees a man who needs introducing to all the joys life has to offer. So although officially they are coming together for fighting lessons, unofficially their physical contact begins to blur the line between friendship and begins to grown into something more…

“‘You and I, we’re both of two worlds – me, who never wanted to be a duke, and you, who didn’t have a choice about who you were, whether you were scrubbing kitchen grates or dancing in ballrooms. I want us to be together to create one world – one world in which two people love one another.'”

It’s always nice to start with a lovely quote, yes?

I’m so sorry to say that this book was a huge disappointment, and one of the worst HR’s I’ve read this year. This is a particular shame because I actually really enjoyed book 1 (review here) and had high expectations for the sequel.

This book felt hastily written, with a repetitive narrative that made me so impatient and frustrated while reading. There was less interaction with the couple than I would have liked, and a rushed ending that couldn’t salvage their relationship. I’ve never felt such a disconnect with main characters before, and Nash/Ana Maria were the blandest characters I’ve read in a while, and had superficial characterizations. I honestly could sum up this book within 3 pages rather than the 300-something pages that the book is due to repetition and useless encounters that contributed nothing to the plot, romantic relationship, and character. There is nothing that could differentiate TALL, DUKE, AND DANGEROUS from the numerous Historical Romances out there, and unfortunately I’d recommend romance readers to pass this one. It just felt like the author didn’t care about the characters, and thus I as a reader didn’t care about them.

Meet Ana Maria: She kind of has a Cinderella story. She used to be treated like a servant when her step-mother was alive, but now that the woman is dead, she can become the Lady she was meant to be. Her background was supposed to be humble, I believe, but it contributed nothing to her character. She, what, thinks about cleaning once or twice in the book? Otherwise, it’s a whole lot of “I’m special because I know what it’s like to be a servant” dialogue rather than actively making use of her past experience. Ana Maria also goes like “Wow, it sucks to be a Lady but at least it’s still better than being a servant.” I think the author wanted to explore social hierarchies through this introspection but it doesn’t land well. Two lines of thinking about the dynamics between maid and Lady does not equate to being a deep character, Ana Maria. She also believes her a walking “oxymoron,” since she’s always thinking opposite thoughts. This was really not well-executed and instead you can’t help but get impatient with her. We get it, you’re special, please continue with the plot already. Otherwise, she’s had a crush on her half-brother’s best friend Nash (a trope that I usually enjoy), who seems to be reciprocating her feelings yet not her intentions to marry. She doesn’t know why, but she’s going with the flow. Finally, there’s an interesting subplot of her using her talents in interior design as a noteworthy cause/goal in life. THIS was the best part of her character, and could have been more central to the plot.

Instead, the plot meanders soooo slow that within 50% of the book, the characters still think the same thoughts as they did in the beginning. Barely any relationship progression at all! If they start the book secretly liking each other, and in the middle they’re still IN that position, what was the point of half the book? I cannot fathom.

Meet Nash: He’s getting pressure for his grandmother to marry and beget an heir so the ducal name doesn’t go to his current heir, who is abusive like his father was. Nash is a big grump and likes to grunt instead of talk. This is perfect, because now the author doesn’t have to think about his dialogue! And it really shows. For grumpy characters, it’s more impactful to see them get taken out of their comfort zone with their partner, but Nash is like “nahh – I’m happy with my grunts.” And this grunting stems from childhood trauma about his emotionally and physically abusive father telling Nash “you will grow up to be just like me,” with violent urgings and all. Nash’s deal is that he doesn’t want to be violent like his father (and you can see he likes to take his immense anger out with fighting and smashing things), so if he marries someone he doesn’t care about, he won’t be emotional enough to be like his father. He also has this side plot with his missing mother, who left him with he was a child to be with his abusive father, alone. He’s happy to be reunited with her, and while I’m glad she got away from the situation, it shows a lot that the other characters were okay with her leaving her child alone with the abuser (this was never resolved on-page).

Throughout the book, Ana Maria and Nash think the same things: “I’m not good enough. I have a secret crush on my brother’s best friend/best friend’s sister. I’m so attracted to them but they deserve better.” Blah blah blah. Lack of communication between the couple really stalled their relationship, and the final conflict was exceptionally dramatic and unmoving. I read historical romances to feel hopeful because it’s romance, right? The only feelings I got from this book were impatience and frustration. (By the way, the blurb promises fighting lessons, but the only fighting lesson you see in this book is how to deliver ONE punch. What a waste of a plot point.) Because of the bland characterization, repetitive narrative AND dialogue, and slow pace (NOT slow burn), I really can’t recommend this book. It felt messily written, with logic jumps that were making me dizzy. Not to mention the anachronism going on (which usually I don’t care about, but adding anyway). Hopefully the next book in the series is more like book 1.

Thank you Avon and Netgalley for the review copy!