Today I’m here with a review of Star-Touched Stories, the third book that takes place in the beautiful setting of The Star-Touched Queen (my review here and fanart here), and A Crown of Wishes (my review here and fanart here). Star-Touched Stories, however, brings forth three short stories that not only ties these books together, but wrap them in an epilogue that will leave readers brimming with love and emotions. Chokshi’s writing is always so passionate, and this master storyteller leaves not a thread hanging in these stories.

Three lush and adventurous stories in the Star-Touched world.

He was Lord of Death, cursed never to love. She was Night incarnate, destined to stay alone. After a chance meeting, they wonder if, perhaps, they could be meant for more. But danger crouches in their paths, and the choices they make will set them on a journey that will span lifetimes.

Now that her wish for a choice has come true, Aasha struggles to control her powers. But when an opportunity to help Queen Gauri and King Vikram’s new reign presents itself, she is thrown into the path of the fearsome yet enchanting Spy Mistress. To help her friends, Aasha will have to battle her insecurities and perhaps, along the way, find love.

There is a tale whispered in the dark of the Empire of Bharat-Jain. A tale of a bride who loses her bridegroom on the eve of her wedding. But is it a tale or a truth?

Throughout these stories, Chokshi’s writing remains provocative and sensual – perhaps leaning towards the purple prose side for some readers. I for one really enjoyed her heady descriptions and imaginative metaphors, and any reader who has enjoyed her previous two books in this world will adore this one. It ties in so many stories and characters, as well as presents itself as a final kiss and goodbye to the stunning world that we have visited twice already.

Note: this review will contain slight spoilers to The Star-Touched Queen and A Crown of Wishes!

This story is a prequel to Chokshi’s debut, The Star-Touched Queen. In TSTQ, Maya and Amar are given a second chance to revisit their love and correct their mistakes. But what happened when they first fell in love?

I love how Chokshi set-up Death and Night’s characters in this story. Night sold her wares at the Night Bazaar, which consists of this dream fruit that is coveted by many, but at a high price. She wants recognition. Death has been lonely these past years, and he needs to take a bride. The only catch is: he can’t fall in love with her. Despite obstacles and all odds, they meet each other and begin a sweet, sometimes snarky, but altogether delightful courtship that is tested through the threads of time. I loved this little insight to Maya and Amar’s past life, and seeing familiar characters! END_OF_DOCUMENT_TOKEN_TO_BE_REPLACED

Synopsis:
An ancient mystery. An unlikely union. For one young princess in a state of peril, a dangerous wish could be the only answer…
She is the princess of Bharata—captured by her kingdom’s enemies, a prisoner of war. Now that she faces a future of exile and scorn, Gauri has nothing left to lose. But should she trust Vikram, the notoriously cunning prince of a neighboring land? He promises her freedom in exchange for her battle prowess. Together they can team up and win the Tournament of Wishes, a competition held in a mythical city where the Lord of Wealth promises a wish to the victor. It seems like a foolproof plan—until Gauri and Vikram arrive at the tournament and find that danger takes on new shapes: poisonous courtesans, mischievous story birds, a feast of fears, and twisted fairy revels. New trials will test their devotion, strength, and wits. But what Gauri and Vikram will soon discover is that there’s nothing more dangerous than what they most desire.

Thank you MacMillan for the review copy!

Note: This book is a companion to A CROWN OF WISHES, and thus will have no spoilers for the previous book in the series.

Roshani Chokshi does it again with A CROWN OF WISHES, the companion sequel to her best-selling THE STAR-TOUCHED QUEEN, which you can find my review here. Filled with heavy imagery and a flowy prose, this book focuses on Gauri, a warrior princess who tried to take the throne and failed, and Vikram, the fox prince who wants to extend beyond his name as the next puppet king in the country his father rules. Both characters are so endearing and you really fall in love with them – and their dialogue – as we enter this magical adventure with them. END_OF_DOCUMENT_TOKEN_TO_BE_REPLACED

Fanart Friday is a feature to showcase art for books I’ve highly enjoyed recently. Usually they’re for fave characters that I can’t help but want to bring to life through my art!

I’m finally done and ready to share my character art for this gorgeous book! Stay tuned on the blog for my review of A Crown of Wishes by Roshani Chokshi, which comes out March 28, 2017 from St. Martin’s Griffin. Suffice it to say, I absolutely adored it – possibly even more than The Star-Touched Queen, which is a companion book to this one. We may or may not get some familiar characters, but throughout it all Chokshi maintains her lush writing and vibrant characters.

A Crown of Wishes
Author: Roshani Chokshi
+Add to Goodreads

Gauri, the princess of Bharata, has been taken as a prisoner of war by her kingdom’s enemies. Faced with a future of exile and scorn, Gauri has nothing left to lose. Hope unexpectedly comes in the form of Vikram, the cunning prince of a neighboring land and her sworn enemy kingdom. Unsatisfied with becoming a mere puppet king, Vikram offers Gauri a chance to win back her kingdom in exchange for her battle prowess. Together, they’ll have to set aside their differences and team up to win the Tournament of Wishes—a competition held in a mythical city where the Lord of Wealth promises a wish to the victor.

Reaching the tournament is just the beginning. Once they arrive, danger takes on new shapes: poisonous courtesans and mischievous story birds, a feast of fears and twisted fairy revels.

Every which way they turn new trials will test their wit and strength. But what Gauri and Vikram will soon discover is that there’s nothing more dangerous than what they most desire.

END_OF_DOCUMENT_TOKEN_TO_BE_REPLACED

Hey guys! Today I’ll talk a little about my process with this particular piece of work. I guess it’s basically to highlight how you never know where one can go when painting, or drawing, or creating anything in general. I made a lot of mistakes while doing this one, and learned a bunch of lessons throughout it all. 😀 So in the end, I thought I’d share a bit with you guys.

I absolutely adored The Star-Touched Queen by Roshani Chokshi, and you can see my review here. (I highly urge you to check it out on Goodreads too!) The beautiful imagery in the book immediately gave me a lot of ideas. The first picture I sketched and started a watercolor of was a memory tree. That was scrapped, but I might return to it digitally (more ideas are popping up as I type this). Instead, I turned to a starry sky. So a sketch was made with both Amar and Maya, as I always have to have my main ship in the picture.

*Scroll on top of the pictures to see additional comments!

If I had Copic markers, I would draw in the facial features and more details for the skin and clothes of the characters. Alas, I never find the time to get those. So I decided to make the edits digitally instead, which turned out pretty swell in the end too.

I bolded some of the shadows for the characters while waiting for the first layer to dry. 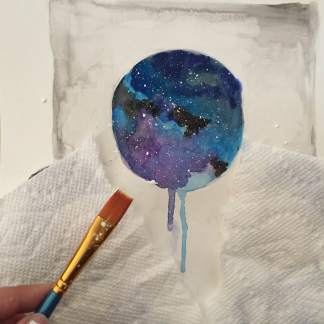 Creating stars via white paint splatters! Also one of my fave things to do at the end.

That’s it for the watercolors!

After doing all I can with the watercolor, I scanned it on my computer to make edits – a lot of them – on some paint programs using a Wacom Splash tablet.

Oddly enough, when I scanned the picture the lighter portions I painted came out a really sick yellow. And I didn’t realize it was there until I switched to my new PC, because the old one (which had Photoshop) has just weird lighting. So yeah, I worked with that stuff for the majority of the session. New tip I learned: to prevent wrinkles, tape the edges of the paper on a flat surface when watercoloring. That’ll probably be better for scanning too.

After coloring in the characters real quick, I switched to my new PC because the old one was making weird noises. I outlined a bit of the lineart, added text, made some finishing touches, and voila, finished product is finished.

Thanks for staying for the ride! The Star-Touched Queen comes out April 26 – less than a month away. 😀

Cursed with a horoscope that promises a marriage of Death and Destruction, sixteen-year-old Maya has only earned the scorn and fear of her father’s kingdom. Content to follow more scholarly pursuits, her world is upheaved when her father, the Raja, arranges a wedding of political convenience to quell outside rebellions. But when her wedding takes a fatal turn, Maya becomes the queen of Akaran and wife of Amar. Yet neither roles are what she expected. As Akaran’s queen, she finds her voice and power. As Amar’s wife, she finds friendship and warmth.

But Akaran has its own secrets – thousands of locked doors, gardens of glass, and a tree that bears memories instead of fruit. Beneath Akaran’s magic, Maya begins to suspect her life is in danger. When she ignores Amar’s plea for patience, her discoveries put more than new love at risk – it threatens the balance of all realms, human and Otherworldly.

Now, Maya must confront a secret that spans reincarnated lives and fight her way through the dangerous underbelly of the Otherworld if she wants to protect the people she loves.

Never have I ever been more happy to have such a stunning book in my hands. I think from the instant I read the five chapter excerpt on Amazon, this book and I just clicked. Chokshi’s lush imagery just draws you in completely and transports you into an utterly unforgettable world where we have trees that don’t bear fruit, but memories. Maya and Amar are seriously a match made in heaven – or should I say a match made in the Otherworld? Either way, if not the captivating setting, than the endearing characters will make for a delightful read that you can’t get enough of. END_OF_DOCUMENT_TOKEN_TO_BE_REPLACED