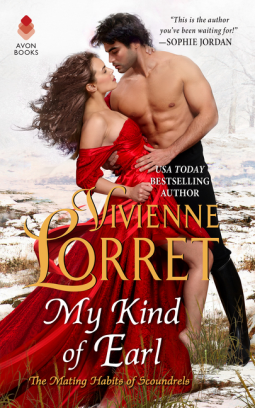 
USA Today bestselling author Vivienne Lorret continues her charming new trilogy with a bluestocking whose search for information on the mating habits of scoundrels has her stumbling upon the missing heir to an earldom… in the London underworld.

Jane Pickerington never intended to start a brawl in a brothel. She only wanted to research her book. Yet when her simple study of scoundrels goes awry, she finds herself coming to the rescue of a dark, enigmatic stranger… who turns out to be far more than an average rake out for a night of pleasure. He’s positively wild!

Only the most feral and cunning could have survived foundling homes and work houses. Orphaned as an infant, Raven never had another name. At least… not until he meets her. Now he’s face-to-face with the one person who recognizes the strange birthmark on his arm and can reinstate him to his blue-blooded birthright.

All at once, Raven’s life takes a turn. His knowledge of dark alleys and gaming hells never prepared him for gilded ballrooms. So Jane becomes his tutor. Yet, the more lessons in decorum she offers, the more this untamed scoundrel wants to teach her all the ways to be wicked.

I originally was super excited for this book because 1) I really enjoyed the first book in this series where we first met Jane, who was spectacularly spunky and curious, and 2) We met the hero Raven in the author’s previous book trilogy (The Rogue to Ruin) and he was so mysterious yet loyal. I loved seeing familiar characters while learning more about Jane and Raven. The dialogue was full of wit, and the chemistry was utterly delectable. Lorret has quickly become one of my favorite historical romance writers, and her books keep getting better. If you’re looking for a quirky heroine who values research and discovery, look no further, because Jane has got you covered.

‘I knew from the moment we met that your curiosity would be my undoing.’

As part of her research for her book, The Mating Habits of Scoundrels (what this series name is based on), Jane visits a brothel in secret to see what exactly sets scoundrels apart from gentlemen. Nobody notices her… except for Raven, who considers himself a simple man. Despite being an orphan, he worked hard to get to his comfortable state of life now, where he has a place he owns and a decent job at Sterling’s gaming hell. He’s content – or so he thinks – until he meets Jane, with all her questions and spunk and energy and relentless curiosity. From there, Jane and Raven get involved with each other – for research purposes, of course!

While the majority of their relationship is light-hearted and full of flirtatious moments and dialogue, things get more serious when Jane finds evidence that Raven might be of noble birth. It’s exciting, but also daunting. Raven wants to find his family, but he’s not sure he fits in with the opulent lives that nobility have. (Good thing Jane’s there to help him with mannerisms and decorum!) Jane, on the other hand, only wants the best for Raven, even if it means putting her all in helping him with his birthright. She’s naturally curious and loves to ask questions and understand the world around her, despite having a bit of a naive air still. While Raven struggles to let people in and truly accept his birthright, Jane seeks someone who sees her as she is, and not just another sibling in a horde of 11 who is often overlooked. They were both precious and vulnerable characters that pulled at my heartstrings. I love how Jane accepted Raven even without a noble background because she truly admired the way he paved a life for himself, while Raven appreciates Jane’s inquisitiveness and oddities.

‘Thus far, I haven’t met anyone who wants to return to my house after the first visit, let alone one who is eager to bestow his heart and soul to me.’
‘Heart and soul, hmm? Is that all you want?’
‘It is all I demand,’ she clarified after a sip and primly dabbed a bead of moisture from the corner of her mouth.’

Eep, the dialogue in this book was absolutely everything. I can’t gush enough about how Jane and Raven interacted, first with veiled attraction and hesitation, and then with careless flirtations that led to deeper feelings. It was a wonderful development, set with an intriguing backdrop of Raven’s past and mysterious murder attempts. I loved the small bits of female friendships as well, as Jane’s biggest supporters are her girl friends who are co-writing The Mating Habits of Scoundrel with her, and I’m excited to see the rest of their stories!

Overall, MY KIND OF EARL was my kind of historical romance – witty, sugary sweet, and filled with delicious dialogue that brings out the best of both characters. There’s a bit of a found family dynamic for Raven, while also appreciating Jane’s role of being a quasi-mother to her younger siblings. Finally, I’m here for the healthy friendships going on in both of their lives. Lorret’s romances are always a hit for me, and MY KIND OF EARL was no different. Brooding hero + inquisitive heroine + surprise birthright/mysterious past = an exciting adventure (and romance!) you don’t want to miss.

Within a matter of seconds, Jane had figured out how they would fit into each other’s lives.
Perfectly, she thought.

Thank you Harper Collins and Netgalley for the review copy!

What are your favorite historical romance heroines? Have you read/enjoyed any of this author’s works yet? Let me know your thoughts!