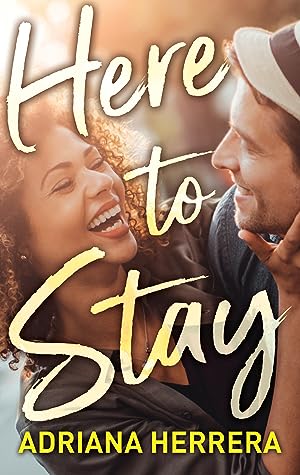 Julia del Mar Ortiz is not having the best year.

She moved to Dallas with her boyfriend, who ended up ditching her and running back to New York after only a few weeks. Left with a massive—by NYC standards, anyway—apartment and a car lease in the scorching Texas heat, Julia is struggling…except that’s not completely true. Running the charitable foundation of one of the most iconic high fashion department stores in the world is serious #lifegoals.

It’s more than enough to make her want to stick it out down South.

The only monkey wrench in Julia’s plans is the blue-eyed, smart-mouthed consultant the store hired to take them public. Fellow New Yorker Rocco Quinn’s first order of business? Putting Julia’s job on the chopping block.

When Julia is tasked with making sure Rocco sees how valuable the programs she runs are, she’s caught between a rock and a very hard set of abs. Because Rocco Quinn is almost impossible to hate—and even harder to resist.

Herrera is a new-to-me author, but after loving HERE TO STAY, I’m excited to check out her backlist as well! I loved reading from the multiple perspectives of Julia and Rocco, who were both New Yorkers whose works took them to Dallas. For Julia, it was her dream job to work with a social program for immigrant and refugee children, creating counseling centers and support for families. For Rocco, it was as a consultant brought in to cut Julia’s social program out of the company – success means a promotion that would lead to a better lifestyle for him and his sister and niece. While work creates tension between Julia and Rocco, there’s an undeniable attraction that they can’t let go of which drives the story and their relationship. It was full of chemistry, respect, and understanding of one another. I loved it!

Here though, in this city and in this apartment, I felt like I was right where I was supposed to be. Like I was a piece of the puzzle, and if I went missing, the picture would not be complete.

HERE TO STAY followed not only Julia and Rocco’s developing romance, but also the way their actions were centered around family. First and foremost is Julia’s loving personality that is exacerbated by her rowdy and supportive Dominican/Puerto-Rican family (her father is PR and her mother is Dominican!). This includes her grandma, parents, and younger sister. You can really see their love and care for one another, and this translates to Julia’s passion for the social program at the fashion company she works at, Sturm. Julia was so great at bringing other ex-New Yorkers in the company together and creating a wonderful friend group. However, she’s plagued by the mistake of following her long-term ex-boyfriend to Dallas and getting dumped shortly afterwards. She asks herself in this book whether she wants to plan a future based on what SHE wants, rather than following another man… or can a balance be reached?

Next is Rocco, who is Irish/Italian and grew up in an abusive home life where his father treated him and his sister like crap. His parents are also both alcoholic, and generally toxic in general. This home environment led to his sister getting pregnant at a young age, and becoming a young single mother. Rocco is her biggest support system, and he has plans to move her and her daughter to a larger place without the toxicity of their parents. Rocco is super hard-working despite such a difficult background and was really diligent to be where he is now! However, he has to grapple with what he believes is right (keeping the philanthropic endeavors of the company) versus pressure from his superiors, which is cutting them off in favor of increased investments as the company goes public. It doesn’t help that his feelings for Julia complicates things, too.

At first I thought this would be an antagonistic relationship, but NOPE. Both characters are so soft and have crushes on the other from the very beginning, which I found super darling. It creates a wonderful tension where they’re both like, “I have to keep it professional… but I’m so WEAK for them.” Eek, one of my favorite kinds of internal conflicts. Rocco is absolutely charming (what with him finding a stray cat and raising it??) while Julia is caring and resilient (especially as she advocates for immigrant children and their families). They were both superb characters, and were so complementary towards the other.

‘That man looks at you like you’re the answer to every question he’s ever had. Trust that you can be that to someone.’

HERE TO STAY features all the best, heartwarming parts of a relationship. The hero Rocco is soft and darling, while the heroine Julia is loyal and full of energy. If you like romances with minor work tension and major attraction, I definitely recommend this one! Also, talk about hot chemistry? Some of these scenes were honestly *fans self*, hehe. Overall, the wonderful family dynamics (found family for the win) and lovable friendships created took this contemporary romance to the next level. I definitely recommend it for romance lovers!

Thank you Carina Press and Netgalley for the review copy!

What are your favorite cities to read about in contemporary stories? Let me know your thoughts!

2 thoughts on “Here to Stay by Adriana Herrera Review | Here for This Romance Between ex-New Yorkers Finding Their Place in Life!”