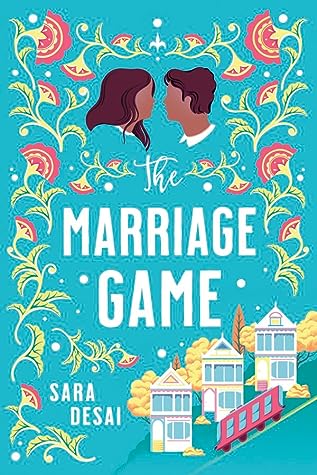 A high stakes wager pits an aspiring entrepreneur against a ruthless CEO in this sexy romantic comedy.

After her life falls apart, recruitment consultant Layla Patel returns home to her family in San Francisco. But in the eyes of her father, who runs a Michelin starred restaurant, she can do no wrong. He would do anything to see her smile again. With the best intentions in mind, he offers her the office upstairs to start her new business and creates a profile on an online dating site to find her a man. She doesn’t know he’s arranged a series of blind dates until the first one comes knocking on her door…

As CEO of a corporate downsizing company Sam Mehta is more used to conflict than calm. In search of a quiet new office, he finds the perfect space above a cozy Indian restaurant that smells like home. But when communication goes awry, he’s forced to share his space with the owner’s beautiful yet infuriating daughter Layla, her crazy family, and a parade of hopeful suitors, all of whom threaten to disrupt his carefully ordered life.

As they face off in close quarters, the sarcasm and sparks fly. But when the battle for the office becomes a battle of the heart, Sam and Layla have to decide if this is love or just a game.

THE MARRIAGE GAME was sweet, sexy, and a wonderful, diverse contemporary read! I really recommend it for romance lovers because the romance is super sweet and I loved the resilient main characters, as well as their family dynamics. I also adored the Desi representation, and the super yummy food descriptions and fun Bollywood references. Overall, this was a great addition to the contemporary romance genre, with super smart and sexy characters that had amazing character development.

“Layla made him feel things he wasn’t ready to feel. She made him think about things he’d buried years ago. She was redemption made real. But was he worthy of being redeemed?”

The story starts with Layla breaking up with her media star boyfriend and getting fired from her job. She goes back to her family’s restaurant where they cook traditional Indian cuisine and starts to work her own recruitment agency upstairs. The problem is, she finds herself having to share an office with another businessman whose job is to FIRE people. Cue sparks, and the marriage game is on. While Layla’s father is recovering from a heart attack, he sets her up with 10 Desi men, which she goes on dates on… with Sam (the hero) as a chaperone, hehe. Sometimes the story seemed a tad silly and unrealistic, but overall it was all-around fun and chaotic good energy.

“‘Having you in the office, watching you run your business, is inspiring. And instead of wanting to chase you out …’ Her cheeks heated. “I want to let you in.’”

Both Sam and Layla are really sweet characters who are trying to do good in their lives. Layla is trying to start over after seeing her cheating boyfriend and getting fired from her job. This time, she’s ready to embrace her family, whether that’s helping them at their restaurant or going on blind dates per her father’s will, while setting her life to rights. Sam, on the other hand, doesn’t feel like he deserves the love of his family after failing to save his younger sister from an abusive arranged marriage. He’s on a quest for vengeance against his ex-brother in law, which becomes a large point of conflict. I think he should have opened his eyes earlier to his obsession with revenge, as it dragged more than it should have and really halted the relationship development. Nevertheless, readers experience a good grovel as Sam realizes that his life is more than revenge.

THE MARRIAGE GAME is sweet, fun, and has the exciting energy of a Bollywood bop! I really recommend this #ownvoices contemporary romance as it explores two lost souls and the culture and shenanigans that bring them together.

Thank you Berkley and Netgalley for the review copy!