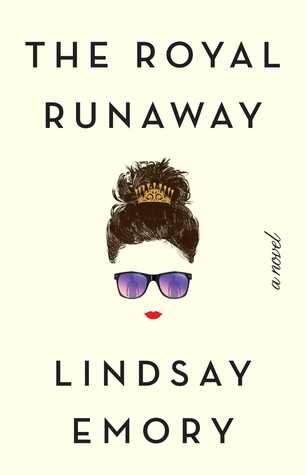 For fans of The Princess Diaries and The Royal We comes a fun and daring novel about a modern-day princess who teams up with a spy to find out what happened to the fiancé who left her at the altar—and who just might get her own fairytale in the process.Princess Theodora Isabella Victoria of Drieden of the Royal House Laurent is so over this princess thing.

After her fiancé jilted her on their wedding day, she’s finally back home after spending four months in exile—aka it’s back to press conferences, public appearances, and putting on a show for the Driedish nation as the perfect princess they expect her to be. But Thea’s sick of duty. After all, that’s what got her into this mess in the first place.

So when she sneaks out of the palace and meets a sexy Scot named Nick in a local bar, she relishes the chance to be a normal woman for a change. But just as she thinks she’s found her Prince Charming for the night, he reveals his intentions are less than honorable: he’s the brother of her former fiancé, a British spy, and he’s not above blackmail. As Thea reluctantly joins forces with Nick to find out what happened the day her fiancé disappeared, together they discover a secret that could destroy a centuries-old monarchy and change life as they know it.

Funny, fast-paced, and full of more twists and turns than the castle Thea lives in, The Royal Runaway is a fresh romantic comedy that will leave you cheering for the modern-day royal who chucks the rulebook aside to create her own happily-ever-after.

To give you a clue on how I felt about this book, The Royal Runaway ruined my post-Royal Wedding haze. Yes, the Royal Wedding that happened less than a week ago (per writing this review) for Prince Harry and Meghan Markle that I couldn’t escape from social media, and subsequently ended up enjoying. I really wanted to like this book – I really did. There’s a super cute cover, a tight and engaging premise, and in general just sounded like a fun ride. Instead, I get lackluster chemistry, lackluster character development, and a cardboard love interest. Around the 50% mark, I was looking at the time to see how fast I could finish it. The answer? Not fast enough.

We start the book with the incredibly spoiled and privileged main character, Thea, being jilted by her fiance who she only agreed to marry out of duty. We never really get to explore her feelings about this whole event, as she’s shipped to an island to recuperate and explains in her narrative that she cried a lot and slept very little. All this for a man she never really loved. WHAT was her reasoning for this? A LOT of her actions did not make sense, which made me incredibly frustrated and disgruntled with her. It’s one thing to make a realistic mistake and grow from it, it’s another to continually make illogical decisions, backed by illogical reasoning, to create unnecessary scenarios. And that’s exactly what this privileged princess did.

“Other women felt like princesses on their wedding day. Me? I really was a princess. I had the tiara, the palace, the framed certificate, and everything.”

So Thea “grows” from being a runaway princess to someone who plots for a bigger ambition. I guess that’s the only character development there is? She gets blackmailed by this mysterious spy from another country and ends up trusting him because of his big muscles and sexy Scottish burr. He just… is so dark and dangerous, y’know? How can you NOT trust a man who blackmailed and lied to you? Sooooo dreamy. Thus, she runs away from her duties and “prison” (aka the palace) to help him figure out what happened to his brother, also known as her currently missing fiance.

I did not feel the chemistry the whole book. 50% into the book, they have shared 3 kisses or so and I was NOT on board with it. Nick, the love interest, is incredibly untrusting of Thea and doesn’t let her help out. The first half of the book is him dragging her to places while being on the run. Then they go back to the palace so Thea can participate in some court intrigue to figure out what’s happening. That part of the book got marginally better, as Thea was actually using her brains and experience as a researcher to discover what was going on. The end and resolution, unfortunately, ruined this bit of enjoyment I had for it.

“‘Of course I trust you,’ he said in what was a very placating tone as he pulled LE MONDE across the table, pausing on a story before absently creasing the upper corner of the page.
‘Then why won’t you answer my questions?’
‘Because you don’t need to know the answers.’ It was as if he’d reached over and patted the top of my head. I hated being patronized.”

And she CONTINUES to let him patronize her. There is no apology. The unequal distribution of power and knowledge between Nick and Thea is honestly quite infuriating. Rather than deviate from the stereotypes that everyreader is tired of, the author ensures that Thea stays in the shadows and gets saved by her man. IN FACT, almost every ‘life-changing’ decision she makes in this book is for a man. The only other decision was to keep the throne.

Okay, the throne. Monarchy. It’s a loaded word, considering the histories surrounding this type of government. The bit of political intrigue adds a dimension where someone is lobbying for a Republic. Instead of thinking about the possibilities and seeing it from their side of view, Thea uses it as an opportunity to defend her family and the monarchy. I don’t have anything against the monarchy, but this was incredibly infuriating. It’s from such a privileged point of view. Thea and her siblings complain about being in a prison and whatnot, when their “duties” are composed of visiting hospitals. Instead of using their monetary and family advantage towards good, they complain about it, and then emphasize it. There is no nuance to the whole conflict, “Oh, I’m a sad and lonely princess who only lives for her duties.” Marrying a man you do not love for the sake of duty is viable evidence for this statement. Having to go to fundraisers and showing national support is NOT viable evidence, and the book never distinguishes this line. Princesses just want to roam around and have fun, after all.

I wish I could say the writing was at least good, but it did not enamor me. I have no idea how and why Nick and Thea fell in love with each other. NO IDEA. Their relationship feels more platonic than anything.

I’m guess I’m glad I read this book, because it reminded me of why I stay far away from royalty romances. (The ONLY exception being A Princess in Theory by Alyssa Cole, which was so so good. You can find my review here. The only royal romance I enjoyed the past decade, honestly.) This wasn’t even a romance, to be fair. It’s not funny (unless you’re laughing at how utterly implausible so much of the plot was) and it won’t “leave you cheering for the modern-day royal,” as the blurb advertises. Thea had so much potential but stayed a stale princess from start to finish. The love interest was a crusty potato whose only saving grace were his muscles. I don’t think I would recommend this to anyone, but maybe this appeal to other romance readers. So perhaps come in with low expectations and an open mind.

Thank you Netgalley and Gallery Books for the review copy!