I’m absolutely delighted to feature this spectacular book on my blog for today! Gifted sends us to the near future, where Taylor Swift recently died while she was ~100 years old and the entertainment industry is DOMINATING. We get to explore what it really means to be “gifted,” and who exactly deserves the music that is made in the world. Because even though it seems like music is free, we see all these copyright laws surrounding it. This is all under an adventure with two characters that you can’t help but like. 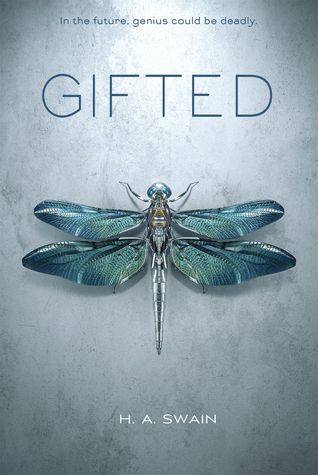 In Orpheus Chanson’s world, geniuses and prodigies are no longer born or honed through hard work. Instead, procedures to induce Acquired Savant Abilities (ASAs) are now purchased by the privileged. And Orpheus’s father holds the copyright to the ASA procedure.

Zimri Robinson, a natural musical prodigy, is a “plebe”–a worker at the enormous warehouse that supplies an on-line marketplace that has supplanted all commerce. Her grueling schedule and her grandmother’s illness can’t keep her from making music–even if it is illegal.

Orpheus and Zimri are not supposed to meet. He is meant for greatness; she is not. But sometimes, rules are meant to be broken. Here is a thriller, love story, and social experiment that readers will find gripping–and terrifying.

What if you were born into a world where it was illegal to do the thing that you love the most? That’s exactly what happens to Zimri in Gifted, a stand-alone told through alternating first person POV’s set in the near future. We follow Zimri and Orpheus’s adventure in the music industry and see them battle the blatant social stratification in their society, as well as discover who really deserves the music that is so preciously guarded by the leaders of the showbiz industry.

When we first get introduced to the world, the author gives us parallels with the technological-based insects who have cameras that roam the land to the actual, living insects that buzz their way in the sky. It took a while for me to get in with the new lingo and futuristic version of the world, but once that was established and the pace started picking up, I was fully engrossed in the story. We get to read between alternating POV’s of Zimri and Orpheus. They both were unique characters that went against what their place in society set for them, and defied the ways of the norm to defend what they thought was right.

Zimri was awesome. She’s called a plebe, and her and other people work in a huge warehouse that manufactures products to be distributed around the area. It’s some serious factory line stuff over there. Despite her limitations, she continues to make the music that she so dearly loves. Zimri is wholly passionate, unyielding, and fierce. The music can’t be contained within her, and you can really tell how much she needed to let it out.

“The girl has it bad. Music is inside her and Nonda always knew it would eventually find a way out.”

I mean, I know I couldn’t survive without being able to make music. Where creating these sounds had a potential for being arrested. But that’s the world Zimri lives in. On the other hand we have Orpheus, who was born and raised under a sheltered life – an industry baby, if you will. He’s grown up with all the rich kids who become famous and get an implant in their brain to make them “gifted.” After all, it’s his father who is developing the device in the first place. But in the book, you get him wanting a sense of… more. Or at least, he certainly doesn’t want something implanted in his brain that’ll change who he is.

With that in mind, a series of circumstances and accidents lead Zimri and Orpheus together. Orpheus’s eyes get opened to how the plebes live and work, while Zimri is stunned by Orpheus’s charisma and charming attitude. They both begin learning things from each other, and Orpheus sees an opportunity with Zimri’s spontaneous personality and passion for music. He wants to produce her album because he knows that she could be successful in the industry. But that isn’t exactly how these corporations work…

“‘The truth is,’ I declare aloud to the peepers and crickets who’ve begun to sing their evening song, ‘if she’d been born in the City, into a different family, or at a different time, she would never stay a Plebe. She’s the kind of person who would rise above the system like my mother did when that was still possible.’”

And so Zimri and Orpheus find themselves fighting against the system. Gifted is a novel that sends us with a message of never giving up on what you think is right, and taking action on it. Zimri and Orpheus stimulate a reaction in the media that creates a positive, hopeful outcome for the possibilities of the future rather than the restrictive social dominance that we came into the book reading. Because in the end, who really decides whether you’re gifted or not? Sometimes it boils down to being in the right place in the right time, and sometimes it’s the tenacity and will to keep going that get people to where they are in the world.

“‘Making music makes me happier than anything else in life,’ I say, my dreams clouding up my voice. ‘You can’t touch it or live inside of it. Music can’t protect you from the wind or rain. It’s not like we can eat it or drink it. But if I suddenly had no music in my life, I think that I might die.’”

There is also a slight romance that develops between the two characters at a very sedate and comfortable pace. I as a reader enjoyed it because you can definitely tell that the characters were drawn to each other and their abilities. It wasn’t forceful at all and was quite cute, nor did it overcome the main plotline in the story. Orpheus and Zimri both had such brilliant personalities that they leaped off the pages. And bonus points for their names too! We should all know the legend of Orpheus, and Zimri means “my praise” or “my music” in Hebrew. Both names are so lovely and fitting.

My only complaint was how abrupt the ending was – it left me a little discombobulated for a second because everything was happening at once. The resolution was satisfying though, so in general it left a really great message in my heart. If you’re looking for a book that’ll transport you to a time where music is hoarded by the wealthy, then you’ve landed in the right spot. There are creative technological devices that make it a fun sci-fi, and a hopeful message that’ll get you thinking, no matter what kind of reader you are. And finally, music lovers can’t miss out on this one. After all, we know what it’s like to pursue a passion that many people would think we’re “wasting” time on.