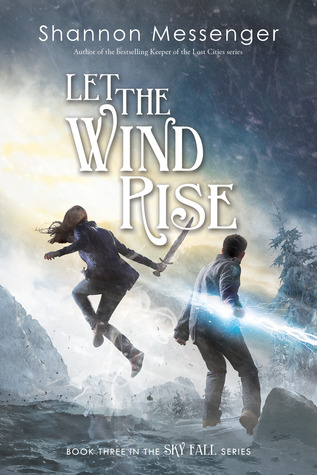 The breathtaking action and whirlwind adventure build to a climax in this thrilling conclusion to the “remarkably unpredictable” (BCCB) Sky Fall trilogy from the bestselling author of the Keeper of the Lost Cities series.

Vane Weston is ready for battle. Against Raiden’s army. Against the slowly corrupting Gale Force. Even against his own peaceful nature as a Westerly. He’ll do whatever it takes, including storming Raiden’s icy fortress with the three people he trusts the least. Anything to bring Audra home safely.

But Audra won’t wait for someone to rescue her. She has Gus—the guardian she was captured with. And she has a strange “guide” left behind by the one prisoner who managed to escape Raiden. The wind is also rising to her side, rallying against their common enemy. When the forces align, Audra makes her play—but Raiden is ready.

Freedom has never held such an impossible price, and both groups know the sacrifices will be great. But Vane and Audra started this fight together. They’ll end it the same way.

May contain slight spoilers for previous books in the trilogy.

I have been waiting for this book since I devoured the second book the day of its release, two years ago. Two years! As you can imagine, the build-up excitement for Let the Wind Rise was off the charts. But two years is a really long time, and be it my growth (however small it may be) as a reader, or change in tastes, but I now find this series riddled with cliches and this last book can only be described as predictable to an extreme.

Continuing on with a dual POV between Vane and Audra, Let the Wind Rise is all about the Gale force trying to defeat Raiden, who has proved elusive in the previous books. Quick background on the story: the Gale force is composed of sylphs who can control the wind – that is, of one of the four directional winds. Vane is the last of the Westerlies who can control the peaceful, Western winds. He’s also scheduled to be king of the Gale forces, which he’s not really excited to be. Plus the fact that that means an arranged marriage and all those responsibilities at the age of seventeen. Not exactly fun stuff. Audra, on the other hand, is a Guardian who was tasked to protect him. Anyways, now she’s captured by Raiden and in the previous book, Vane has stepped up to reclaim his heritage and save her.

“I have a plan.
I have the power of four on my side.
It’s time to be the hero everyone’s expecting me to be.”

This line is an utter joke. I’m not sure how many times Vane has attempted to do something, screwed it up, and said another redemption speech. I understand character growth, and I understand mistakes are necessary for them. What I don’t understand is the constant repetition of the same “It’s time to be a hero” drivel over and oVER AND OVER again. There’s this thing called insanity, and it’s when you do the same thing over and over again while expecting different results. That’s what I felt like Vane was doing throughout the book. It wasn’t until a major event when he finally grew some balls and became “the hero everyone’s expecting me to be.” Son you are 40 pages late in the game!! The worst part is that we were literally left with this speech at the end of the second book. So why was the third book so slow in addressing this concept? If I read them back to back, I would have been even more annoyed.

Putting that aside, the narrations just seemed extremely juvenile. A couple years back, I enjoyed how down-to-earth and silly the characters could be, which I found realistic. Funny and awkward situations also made for a plus. But now, I find them whiny and really unfocused, especially during such crucial moments in the book. It got tiring, quite fast. And there’s a tiny part of me that’s like “Dude but that’s funny,” and the rational one going like, “Honestly if the sylphs’ fates are left to the hands of these characters, I’m surprised they’re not extinct.”

But despite these complaints, I still overall enjoyed Vane, Audra, and all the characters. Once Vane stopped doing his redemption speeches, I found that his personality had an undertone of strength – one that stems from caring for others rather than aggressive behavior. And Audra, as always, had insecurities that were hidden under a tough exterior. I enjoyed how the relationship with her mom was explored in this book, and how Messenger adds this morally gray character that has hidden depths. Solana was also more interesting in this book, now that we focus more on her as a character rather than a silly vertex of a love triangle. She also showed great amounts of courage on the journey (even more so than Vane sometimes).

The action scenes were as exciting as always, but the overall plot was so very predictable. The ending could have been gleaned from the start, which didn’t make it much of a surprise. However, I did rather enjoy the events that led up to that conclusion though (especially the action scenes), and the way the characters from previous books worked together to try to defeat Raiden. It was very satisfying, and despite my qualms with the narration and impatience with redemption speeches, it was overall a really enjoyable trilogy featuring fun characters, an evil villain you’ll love to hate, and a desire to learn more about winds.