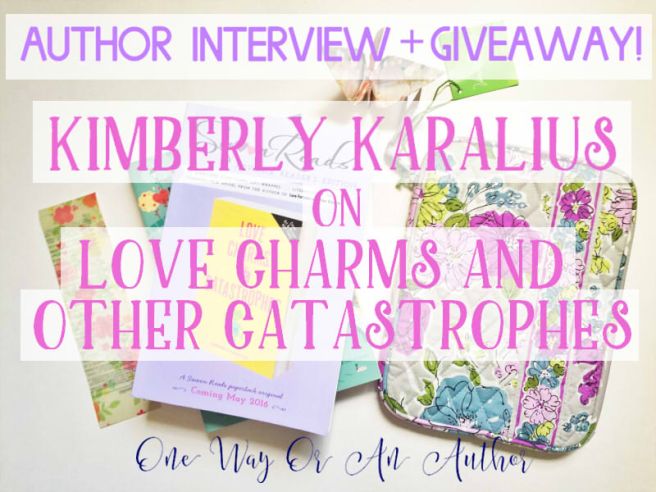 I’m absolutely ecstatic to have Kimberly Karalius on the blog today to talk about her upcoming book, Love Charms and Other Catastrophes! When Kim wanted to set up a date where we could meet up for an interview, I was not-so-subtly freaking out. I normally don’t meet many bloggers or authors in this area of Florida, so meeting with her was like a dream come true! We’re also extremely excited about ALA being in Orlando this summer, which is only an hour away from us.

I completely fell in love with the lovely town of Grimbaud in Love Fortunes and Other Disasters, Kim’s first work. Hearing about the sequel was like:

Especially because it features Hijiri, one of my favorite characters! Look out for Love Charms and Other Catastrophes, coming out on May 17 from Swoon Reads.

*Interview edited for length and clarity

Aila: Thank you so much for coming! First things first – what are five words you would use to describe Love Charms and Other Catastrophes?

Aila: I’m really thrilled to be going back to the charming world of Grimbaud! Will we expect to see the antics of the rest of the rebellion from Love Fortunes?

Aila: Say a gift-wrapped boyfriend suddenly appears in your doorsteps, like Hijiri from Love Charms. Would you consider that a good thing, bad thing – or just stunned beyond belief?

Kim: At this point in time, I would be pretty excited about that. But just like Hijiri, I would probably be skeptical at first. I would be kinda testing him like, “You’re not going to disappear are you? This is for real, right?”

Aila: If you had a boyfriend specially crafted for yourself, what characteristics would you want him to have?

Kim: I think he would definitely need to have some sort of knowledge about cool fandom things – like Doctor Who. And he needs to somehow magically be well-read, even though he was just created yesterday. Super open-minded, too. I know as a writer I certainly am; in order to discover new story ideas, I need someone who can keep up. And naturally, rolled-up sleeves. That always looks good.

Aila: If you had to sort Hijiri and Ken in a Hogwarts house, which ones would they be in and why?

Kim: I would probably say Hijiri’s a Ravenclaw, because she’s extremely focused on her dream of becoming a great charm-maker. And in order to do that, she needs to study; she needs to have an all consuming love of knowledge. That fits Ravenclaws completely.

For Ken, I’d say he’s a Hufflepuff. He’s very sweet, laid back – super loyal. Like, probably when he shouldn’t be. He likes to eat. Which is important, since Hufflepuffs are right near the kitchen.

Aila: Currently, I’m a junior in high school and trying to figure out my future career. Just out of curiosity, what are some qualities one must have to be a successful charm-maker in Grimbaud?

Kim: I think a charm-maker has to be pretty innovated. They have to see things for what they could be, not just what they are. As you’ll see in Love Charms, which is a book that focuses more on the making of love charms than in Love Fortunes, we get to see how Hijuri is putting together all these everyday items and how is she finding meanings in them and combining them overall to figure out the idea of the love charm that she’s making.

You need to have a sort of stubborn streak, because just like with weather charms and hurt charms, you’re going to be meeting failures. Some are not going to do what they’re supposed to do, so you have to be able to not feel like you’re going to give up. You shouldn’t let that get to you, and be able to continue to move forward. I would say those are the two big things. And to also be willing to learn from other people as well. You can’t just rely on books. Hopefully you would find mentors around towns, which is something Hijiri struggles with in the book. There’s new charm-makers coming into town, and she wants to be able to learn from them and she’s not sure if she can.

Aila: Any particular food you like to eat when on a writing spree?

Kim: Maybe pretzels or skittles! You can eat them quickly, and they don’t get in the way when you have to type. Really bad junk food, basically.

Aila: What has surprised you the most while writing this story?

Kim: What surprised me is how stubborn and antisocial Hijiri still is. When I first wrote the first draft, it was really hard to get her out of her apartment. She just wants to go and work on her stuff – perfect her charm-making and hang out with her friends later. It was difficult at first to figure out what’s going to be happening with the ex-rebels and Ken, and how they’re invading her life and pulling her out of her comfort zone; experiencing new things outside from her learning-cave. (Which was also fun to describe.)

Aila: What’s your favorite and least favorite part of the writing process?

Kim: My favorite part is when you’re right in the beginning brainstorming phase, and all the characters are floating around in your head, starting to introduce themselves to you. And then you’re researching at the same time, and grabbing interesting things to the story and how it connects. It’s the feeling of discovery for the first time.

My least favorite aspect would be openings. Sometimes it’s hard to figure out where they start. When you’re trying to get published for so long, you know that to grab a reader’s, publisher’s, or agent’s attention, you have to nail that first paragraph and those first pages. No matter how many times I’m starting a new project, that’s always in the back of my head. Sometimes it can take a few tries, and sometimes I have to write half the book first and realize, okay this should actually begin here. Which is not too devastating, but it just takes some time to figure it out.

Aila: How do you usually get through the dreaded writer’s block?

Kim: Personally, when I have writer’s block, I’m empty of inspiration. I’ll go and pick up a book I’ve reread a hundred times and loved to get some inspiration. Or I’ll find some movies that seem similar in some way or soundtracks (that never fails). If I’m stuck on anything, I’ll totally put up the Pushing Daisies soundtrack, zone out, put the earphones in, and hopefully everything will get fixed.

Eventually, the writer’s block goes away. It’s almost like you’re hitting the bottom of a well, and you just need to fill it up again. It can totally happen when you’re trying to meet a deadline; when you’re working so hard and you’re not consciously remembering to engage in life. Sometimes doing your laundry can be inspiring, too.

Aila: Thank you so much and for the thoughtful responses. ❤

Synopsis:
This sequel to LOVE FORTUNES AND OTHER DISASTERS takes us back to Grimbaud, the town of Love, which is still reeling from the loss of Zita, and the certainty of her love fortunes and love charms. As a key part of the rebellion that overthrew Zita, Hijiri knows that Grimbaud will be better off without Zita’s abuse of Love’s powers, but other charm makers are rushing in to fill the gap Zita’s defeat left behind. When Hijiri learns that the town plans to hold a contest to crown the best love charm maker, she knows that she (and the rest of the rebellion) must win the contest to keep someone else from taking over the town.
And, as if that wasn’t enough to keep her busy, Love has another surprise for her…. a gift-wrapped boyfriend, specially crafted just for her.

Get ready to be charmed by this magical, quirky sequel to Love Fortunes and Other Disasters!

Kimberly Karalius is the author of Love Fortunes and Other Disasters and its forthcoming sequel Love Charms and Other Catastrophes (May 2016). If you gave her a wish bone, she would wish fervently for snow in Florida. Her love for 90s cartoons (or any cartoons, really) knows no bounds. Being in Florida certainly has one big perk: going to Disney World. Which she does. Frequently.

Kimberly holds an MFA in fiction from the University of South Florida. Her fiction has appeared in literary journals such as Luna Station Quarterly, The Medulla Review, and Hogglepot. Her chapbook, Pocket Forest, was published by Deathless Press in August 2013.