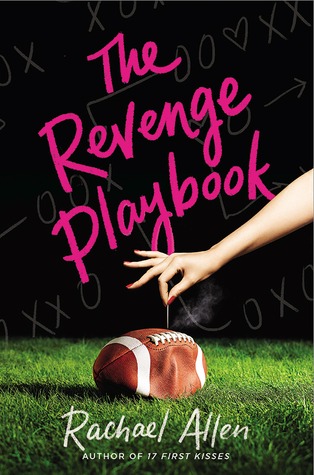 Synopsis:
Don’t get mad, get even!In this poignant and hilarious novel, Rachael Allen brilliantly explores the nuances of high school hierarchies, the traumas sustained on the path to finding true love, and the joy of discovering a friend where you least expect.

In the small town of Ranburne, high school football rules and the players are treated like kings. How they treat the girls they go to school with? That’s a completely different story. Liv, Peyton, Melanie Jane, and Ana each have their own reason for wanting to teach the team a lesson—but it’s only when circumstances bring them together that they come up with the plan to steal the one thing the boys hold sacred. All they have to do is beat them at their own game.

Brimming with sharp observations and pitch-perfect teen voices, fans of Jenny Han and Sarah Mlynowski are sure to fall head-over-heels for this sharp tale—by the author of 17 First Kisses—about the unexpected roads that can lead you to finding yourself.

I won an ARC of this from Goodreads First Reads, which did not have an impact on my rating at all.

Four unlikely girls band together in The Revenge Playbook to go against the football team at their school. As a high schooler myself, it’s not surprising to see that the football players are treated as kings of the school and are given special attention or leniency in regards to their actions. It’s profoundly unfair and I enjoy the fact that the author focuses on those aspects.

In fact, this book had more serious topics than I thought it would. Overall it’s a fun and light read, but it does divulge into a lot of problems in high schools today, including bullying, hazing, and the social hierarchy at school. Each POV is from a character whose life was profoundly affected by the actions of the football team. Thus, they made it their mission to get back at them.

It was a little tiring keeping up with all four girl’s perspectives, but they had unique personalities that were enjoyable to read about. Another wonderful thing was that although Allen portrays the football team as d-bags, not everyone on the team fits into that stereotype. She writes a diverse cast of characters that is surprisingly realistic and ultimately down to earth in regards to their actions and thoughts.

Although The Revenge Playbook deals with the misconducts of football players and the consequences on other people, Allen delivers a humorous and touching read that focuses on the bonds made through acts of courage.